The Leaching World Below Our Garbage 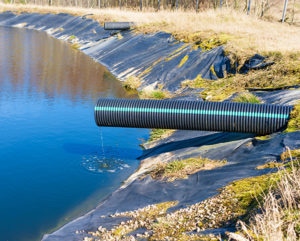 In 1935 the Fresno Municipal Sanitary Landfill opened in California as a model of contemporary landfill design. Trash brought to the site was compacted and covered with dirt in stark contrast to other landfills of the time that did little more than dump the waste in a large pit at the edge of town. The Fresno landfill remained in use until 1989 when it was added to the EPA’s National Priorities List of sites contaminated by hazardous waste that pose a risk to human health or the environment. Over the years, the design and maintenance of landfills have advanced. Gone are the days of oozing, festering city dumps that poisoned drinking water and killed fish. Landfills today are feats of engineering that control decomposition, collect off-gassing, and protect the surrounding environment from contamination.

An important part of landfill operation is controlling the liquid produced from the constant decay of buried garbage and the rainwater that flows through the surrounding soil. This mix of liquids is called leachate, a hazardous combination of bacteria and any number of chemical contaminants that combine to form a dark and dangerous solution. If not contained, leachate can pollute ground or surface water leading to illness or death of wildlife and people.

Leachate collection systems (LCS) are mandated by federal regulations as part of landfill design. An LCS includes a liner placed on the ground before trash is brought to the site. The liner prevents leachate from soaking into the soil below the landfill. Once the landfill is active, leachate collects between the trash pile and the liner and drains into a series of perforated pipes just above the liner. Leachate flows through these pipes to a sump where the hazardous liquid is pumped to a secondary containment tank for disposal, treatment, or recirculation.

The encrusted scale restricts or completely blocks the perforations in the collection pipes preventing the natural flow of leachate from the bottom of the landfill into the collection pipes. Additionally, the reduction in the cross-sectional area of the pipes from scale buildup prevents the flow of leachate to the sump. If scale has coated other components including pumps, downstream pipes, or storage tanks, the entire LCS is in danger from the increased head pressure through the system. Leachate will continue to accumulate at the bottom of the landfill risking a break in the liner and contamination of the surrounding environment.

There are no federal requirements on how often LCS’s need to be cleaned or descaled, but most states require cleaning at 5 or 10-year intervals or when operating permits need to be renewed. As a result, LCS’s may go many years without proper maintenance or sufficient cleaning. Removal of LCS scale and sediment is accomplished through high-pressure jetting, milling machines, or chemical treatment.

Waste Advantage Magazine presented a study by engineering firm CDM Smith comparing the effectiveness of LCS cleaning methods at landfills across Florida. The study concluded that chemical cleaning “was successful at removing most of the precipitate formation, especially in the lower lengths of the LCS. Video inspections confirmed that this technology was successful at removing heavy buildup and restoring flow in areas that were clogged and/or appeared stagnant at the beginning of the cleaning demonstration.”

Because calcium carbonate scale is the primary source of LCS blockages, cleaning chemicals used for these systems must be effective against it. ScaleBreak® Liquid Descaler from Goodway Technologies dissolves calcium-based scale as well as rust, lime, and other leachate deposits. ScaleBreak® is safe for all of an LCS’s components including the plastic collection pipes, steel pumps, and the plastic landfill liner. Using a portable clean-in-place system like the GDS-100-BV scale removal system is an easy way for landfill maintenance staff to pump ScaleBreak® through the LCS. The powerful 1HP motor and 50-gallon capacity distribute the descaler through the most restricted pipes to dissolve scale buildup and return the leachate collection system to its original working condition. The GDS-100-BV is wheel-mounted making it easy to move across the landfill site to each cleaning point.

Leachate collection systems, an integral part of modern landfills, are designed to collect hazardous liquids and prevent those liquids from poisoning the surrounding environment. Over years of constant use, the LCS’s pipes, sumps, and containment systems can get clogged from heavy calcium carbonate scale. Chemical cleaning is the best way to bring LCS’s back to like-new condition and the products from Goodway Technologies are the key to clean, free-flowing leachate collection systems.